After eight years of Ukrainian conflict following the Euromaidan and the declaration of Donetsk and Lugansk as independent republics, came the recognition by the Russian government of the entities in the Dombas as a geopolitical, even existential watershed. In the meantime, Kiev cannot advance its actions without attacking citizens with Russian passports of these republics who, at any moment, could apply for incorporation into the Russian Federation.

Incidents involving Ukrainian “saboteurs” are increasingly frequent, including civilians killed in explosions or killed for attempting to enter Russian territory.

Also, in the midst of the evacuation operation of the Russian-speaking population, the presence of Ukrainian trolls on social networks has been prominent, who try to fabricate claims about the alleged “negative attitude of Russian citizens” towards the people evacuated from the conflict zone.

Although they may seem to be isolated events there is a thread connecting them: the financing of paramilitary groups and mercenary militias by the United States and NATO. This is not a novel act of war; it is the extension of a doctrine that has been applied in different scenarios such as West Asia, Latin America and Africa for many years.

Bob Menendez, a Democratic senator, introduced a bill last January to grant 500 million dollars to Ukraine to buy arms, in order to impose on Russia the so-called “mother of all sanctions” if it invades it, as the political-media dogma dictates. Although he called for rapid progress on this issue and urged to expand U.S. information propaganda, he did not mention overseeing whether U.S. weapons go to white supremacists such as the Azov Battalion.

Asked whether his bill includes surveillance provisions, the senator responded to The Intercept that “that’s a level of detail I’m not sure about,” however he assured that the Defense Department “would have conditions to make sure they are going to the Ukrainian military, not others.” He added that “there is a risk that anywhere in the world those weapons could be used by others,” despite knowing about the existence of neo-Nazi groups in the Ukrainian military. 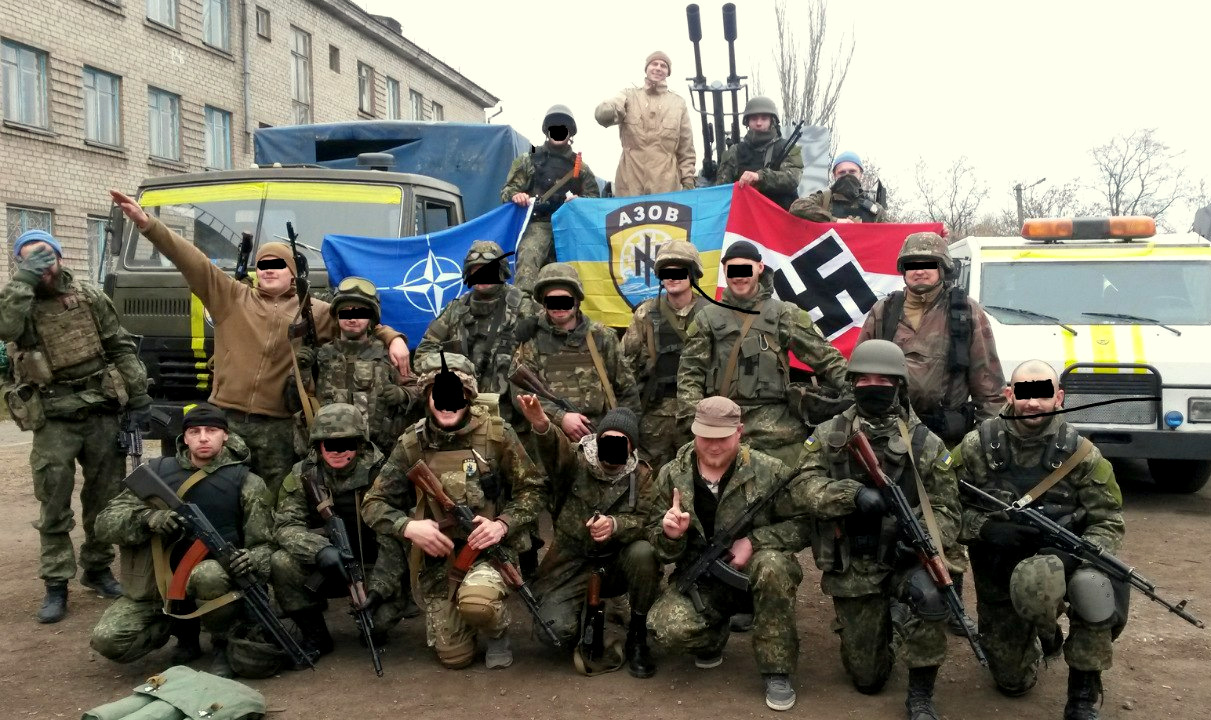 The so-called “Leahy vetting” process is supposed to certify whether foreign forces have committed “serious human rights violations” before giving the green light for U.S. government support, yet it is clear that Washington has no effective procedures in place to track where its weapons go and prevent them from ending up in the hands of extremists.

When a defense bill came before the Senate in 2021, the amendment sponsored by Rep. Rashida Tlaib, D-Michigan, was removed from its final version. This change proposed vetting forces receiving U.S. military assistance for violent ideologies, “including those that are white identity terrorists, anti-Semitic or Islamophobic.”

Also in 2021, Democratic Rep. Elissa Slotkin asked Secretary of State Antony Blinken to label the Azov Battalion a foreign terrorist organization, stating that it “uses the Internet to recruit new members and then radicalizes them to use violence in pursuit of its white identity politics agenda.” She was overruled.

NATO and the CIA sponsored numerous stay-behind networks (spies and armed groups “behind enemy lines”) in many European countries during the Cold War, the intention being to activate them in case the Warsaw Pact countries attacked them or any communist party in these countries came to power democratically, or even there was any “threat” to the status quo favorable to US interests. In this way the American CIA and British MI6 have supported neo-Nazi groups and launched them against Russia. Today they are highly dependent on Western funding.

According to the US Congressional Research Service, between 1991 and 2014 the United States contributed up to $4 billion to Ukraine through military assistance, another $2 billion more since 2014 and another $1 billion via NATO. The list continues with the United Kingdom and other Western countries with no less onerous contributions that have raised Ukraine’s military spending from 3% of its GDP in 2014 to 6% in 2022, just over $11 billion.

SCENARIO OF SYMBIOSIS BETWEEN NEO-NAZISM AND NATO

The war being waged from Ukraine has clear ideological traits that promote values far removed from the freedom, equality or fraternity with which Western propaganda continually churns out through the extraordinary number of networks at its disposal.

In November 2021, Dimitro Yarosh, founder of the ultra-nationalist and paramilitary Pravy Sektor (Right Sector) party, was appointed advisor to General Valeri Zaluzhni, head of the armed forces, by Ukrainian President Volodimir Zelenski. The “activist” is a veteran member of NATO’s Stay-Behind networks. In 2007, during the second Chechen war, he was instructed by the CIA to coordinate Nazi and Islamist cells against Russia from Ternopol, western Ukraine.

In 2014, Yarosh played a central role in the Euromaidan, then was a deputy and candidate for the presidential election, the following year he was seriously wounded. He is held responsible for leading the Azov Battalion, and young foreign fighters, in the shelling of several localities of the Dombas during the Munich Security Conference held last February 18-20. There are reports that among the foreign fighters who took part in this provocation were several jihadists brought to Ukraine from Syria. 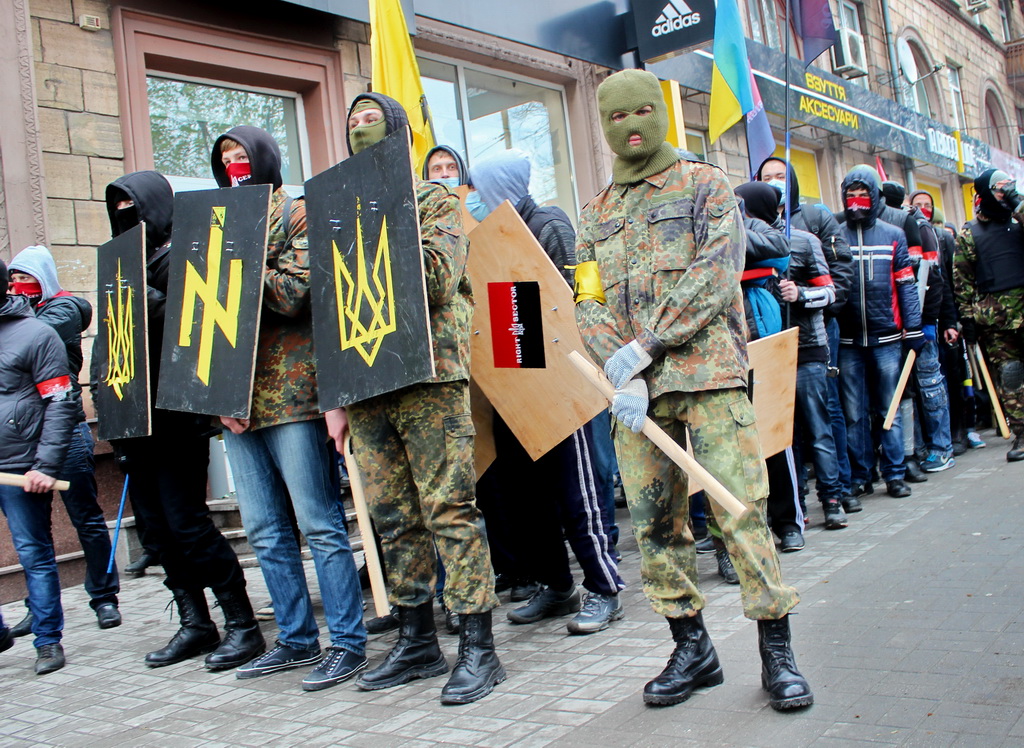 The Azov Battalion, now a mechanized special forces regiment, trained and armed by the United States and NATO, is renowned for its ferocity in attacks against Russian populations in Ukraine and recruits neo-Nazis from all over Europe under a flag inspired by the insignia of the SS Das Reich Division, one of the 200 Hitlerite divisions that invaded the Soviet Union in 1941. It is under the command of Andrey Biletsky, its founder now made a colonel by the regime ruling from Kiev.

According to military analyst Manlio Dinucci, it is “not a military unit but an ideological and political movement with Biletsky in the role of charismatic leader, especially in the eyes of a youth organization whose members have been educated to hate Russians by reading Biletsky’s own book, whose title is very revealing: The Words of the White Fuhrer”.

The Leahy Law has been ineffective in ensuring that neo-Nazis of the Azov Battalion do not receive U.S. training, so reported the Daily Beast in 2015. Ukrainian-American researcher Oleksiy Kuzmenko reported last September that members of an informal group called Centuria Military Order, linked to the international Azov movement, have trained at a Western-backed military institution.

Members of Pravy Sektor are in Pavlopol, locality of Dombas, accompanied by an information and psychological operations center and the film crew of a Ukrainian channel, so denounced the deputy commander of the militia of the self-proclaimed Donetsk Republic, Eduard Basurin.

Some of the facts seem to be repeated from scenes in Syria, Russian Defense Minister Sergei Shoigu has denounced the presence of US mercenaries equipped with chemical weapons in the Dombash to blame the Russian population and justify a “response” by Kiev troops and paramilitaries, who outnumber the defenders in the region.

Leonid Pasechnik, leader of the Lugansk People’s Republic, denounced in an interview with Sputnik the sending of mercenaries to Ukraine posing as NATO advisors and stated that there are many fighters who “speak other languages, wear the foreign camouflage uniform and behave in a rather provocative manner”.

A report published in Yahoo! News refers to a program implemented by Barack Obama in 2015 in the southern United States and has been expanding during the presidencies of Donald Trump and Joe Biden. It contemplates training in the use of weapons, camouflage techniques, land navigation, tactics of how to “cover and move,” intelligence and other “tactical things” that can be used as “offensives if the Russians invade Ukraine.”

In addition, the private military company Blackwater (called Academi and later Constellis) markets mercenaries for the purpose of executing extralegal operations (torture and assassinations) for the CIA, Pentagon and State Department. Its founder, Erik Prince, planned last July to create a private army in Ukraine together with Lancaster 6, a British company through which he has already sent mercenaries to Africa and the Middle East. This plan amounts to 10 billion dollars and includes Ukrainian intelligence, also controlled by the CIA. 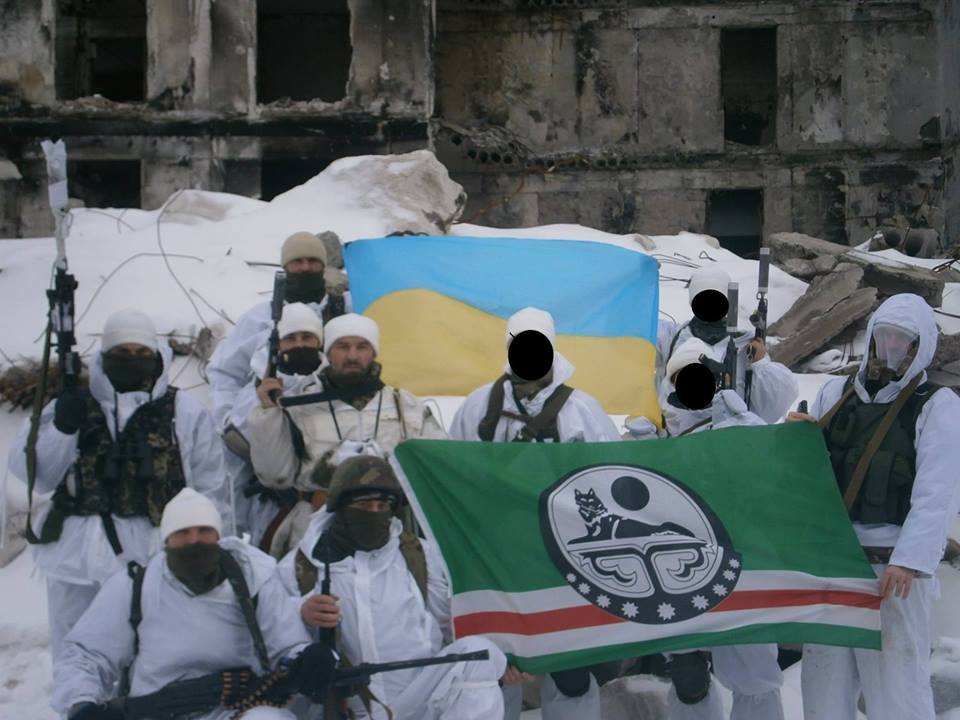 United World International reported that the United States has prepared a plan that seeks to provoke tensions between Turkey and Russia by moving Syrian jihadists and mercenaries to the Dombas region to fight against Russian and pro-Russian forces. According to international sources it would involve thousands of ISIS militants, including Tatars and Chechens, who know the region well. In 2020 the Ukrainian newspaper Zoborana published an article providing some data:

“Several hundred former fighters of the Caliphate have chosen Ukraine as a place of settlement. With weak public institutions, corruption, porous borders and ongoing skirmishes, Ukraine offers great opportunities for those who want to stay hidden.”

“Ukraine is attracting militants they have lost in Syria and Iraq. The country is a good and safe place to stay, hide and wait until they have a chance to return home to the European Union or a former Soviet Republic.”

It should be noted that Trump openly stated that the CIA had founded ISIS, moreover, the organization includes Chechen militants who served in the Georgian war, then were transported since 2011 to Syria and, according to leaked news, about 300 started fighting in the Dombas region since 2014.

Other jihadists come from former Soviet republics and Central Asia, including about 500 Crimean Tatars, militants of the Hizb ut-Tahrir terrorist organization operating since before Euromaidan, and others from the separatist Chechen Caucasus Emirate whom Yarosh would have asked in 2014 to join forces against Russia.

The paramilitarization of the war by means of mercenaries has served the United States to regionalize conflicts and to make the approach to their consequences more diffuse. In the same vein, the Ukrainian parliament has just passed a bill on “the right to self-defense” and “the right to bear firearms” for the civilian population, which includes all the arms brokerage and extremist groups trained in the region and also brought in from other latitudes.

The Ukrainian state is in an accelerated process of decomposition at the hands of an oligophrenic elite, which is expanding its criminality in order to sustain a geopolitical tension encouraged by the United States and its allies. In the meantime, Europe is witnessing a spectacle in which Nazism, which destroyed it, is what it must defend.