The Chief of the Nuclear, Biological and Chemical Protection Troops of the Armed Forces of the Russian Federation, Lieutenant General Igor Kirillov, reported the existence of a chain of more than 30 biological laboratories divided in countries of the post-Soviet area, including Ukraine, for alleged scientific research and for sanitary-epidemiological investigations.

This has resulted in the fact that, for instance, “under the pretext of testing agents for the treatment and prevention of coronavirus infection, some thousands of serum samples taken from infected persons belonging to the Slavic ethnic group have been transported from Ukraine to the Walter Reed Army Research Institute,” the report adds.

The senior official says that the activity of biological laboratories in Ukraine, specifically, has led to an unmanageable increase of economically dangerous risks related to an increase in cases of rubella, diphtheria, tuberculosis, measles, cholera, botulism, poliomyelitis, hepatitis A and influenza.

Last Sunday, Russian Defense Ministry spokesman Igor Konashenkov reported that the United States has been carrying out work to enhance the pathogenic properties of microorganisms using synthetic biology methods together with the Ukrainian government. He added that dangerous pathogens, which were evidence of a biological weapons development program funded by the Pentagon (U.S. Department of Defense), were hastily destroyed in these laboratories.

“We have received documentation from employees of Ukrainian biolaboratories about the emergency destruction on February 24 of particularly dangerous pathogens of plague, anthrax, tularemia, cholera and other deadly diseases,” the official stated, which would demonstrate the concern of the US military establishment about the possibility of disclosure of secret biological experiments on Ukrainian territory.

Konashenkov stressed that in order to prevent it from coming to light that Washington and Kiev violated the Biological Weapons Convention, the Ukrainian Ministry of Health “issued a directive for emergency disposal of stockpiles of stored dangerous pathogens.” It demonstrated this by publishing several documents that “…are being analyzed by Russian experts of the Radiological, Chemical and Biological Defense Forces.”

In April 2021, Nikolai Patrushev, secretary of the Russian Security Council said that U.S. laboratories were opening “by a strange coincidence” near the borders of Russia and China, and outbreaks of diseases not typical for these regions were detected in adjacent areas.

“We are told that peaceful sanitary and epidemiological stations operate near our borders, but for some reason they are more reminiscent of Fort Detrick in Maryland, where Americans have been working in the field of military biology for decades,” added Patrushev.

CARNIVAL OF CONTRACTS AND BIOMILITARY LOBBIES AROUND UKRAINE

Via a Twitter thread, Bulgarian freelance journalist, Dilyana Gaytandzhieva, revealed a series of documents that the U.S. Embassy in Ukraine deleted from its website. They concern the funding of 11 biological laboratories in that country through the Defense Threat Reduction Agency (DTRA) of the Department of Defense, a military program that constitutes sensitive information.

These are the documents which the US Embassy does not want you to see: pic.twitter.com/gEEBLFXRdW

Research by the war crimes specialist reveals that Ukraine has no control over military biolabs on its own territory. The agreement reached in 2005 between the U.S. Department of Defense and the Ukrainian Ministry of Health prohibits the Ukrainian government from publicly disclosing sensitive information about the said program and obliges it to transfer dangerous pathogens for biological research to the Pentagon, which has had access to certain Ukrainian state secrets in connection with the projects under its agreement.

Military biolabs in Ukraine are run by U.S. contractors such as Southern Research Institute (SRI), Black & Veatch Special Project Corp, CH2M Hill and Metabiota that have projects on cholera, influenza and Zika, all pathogens of military importance to the Pentagon. 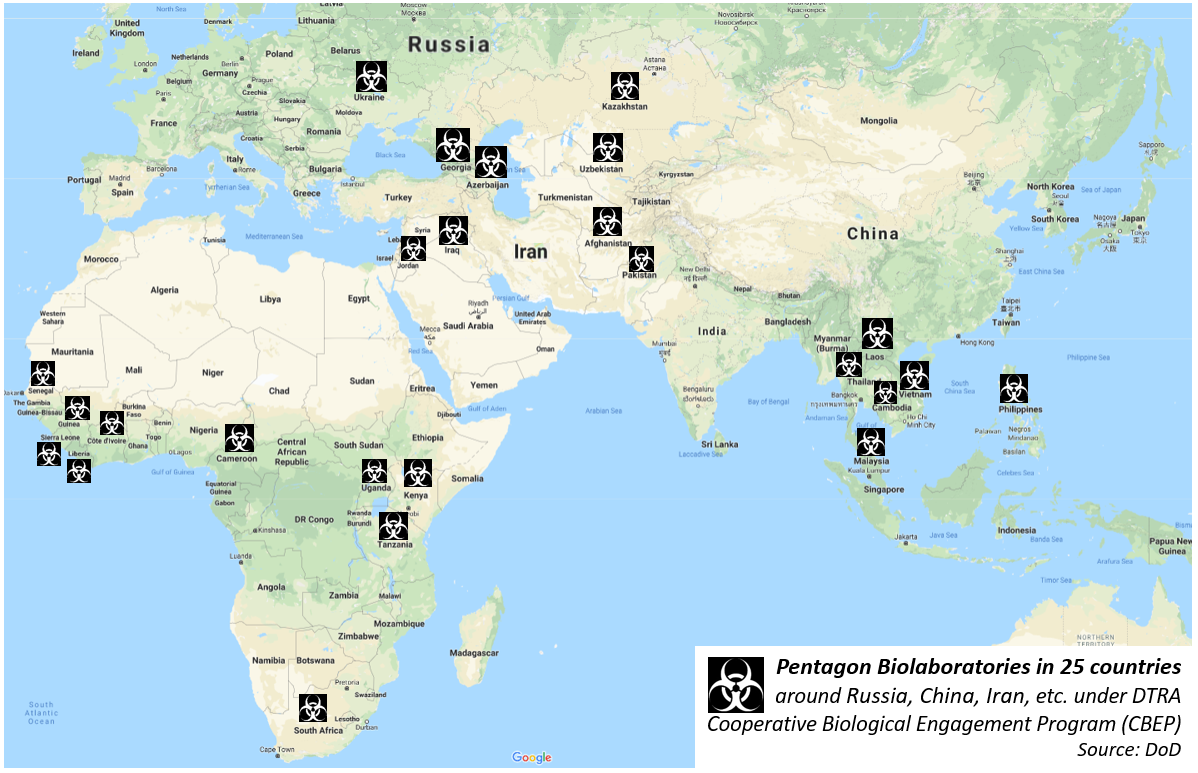 SRI’s lobbying is legendary; it was a prime contractor to the Pentagon under the U.S. Biological Weapons Program for bioagent research and development, with 16 contracts between 1951 and 1962.

It was also a subcontractor on a Pentagon program for anthrax research in 2001 in which the prime contractor was Advanced Biosystems, chaired by Ken Alibek, a former Soviet microbiologist and biological warfare expert from Kazakhstan who defected to the U.S. in 1992.

Between 2006 and 2016, SRI paid $1.28 million to lobby the U.S. Senate, House of Representatives, State Department and Defense Department, the binding node being former Senator, and then Trump-era U.S. Attorney General, Jeff Sessions. His aide on Capitol Hill, Watson Donald, was later a senior director at the contractor.

FIGURES ON THE DISASTER-FINANCED EXPANSION

According to Gaytandzhieva’s investigations, the Pentagon has carried out biological experiments with a potentially lethal result on 4,400 soldiers in Ukraine and another 1,000 in Georgia, whose governments have propitiated permissive enclaves of the war machine that the Atlantist bloc has wanted to expand to the borders with Russia. There is an extensive record of irregular events that have occurred around serious communicable diseases, some of them are: 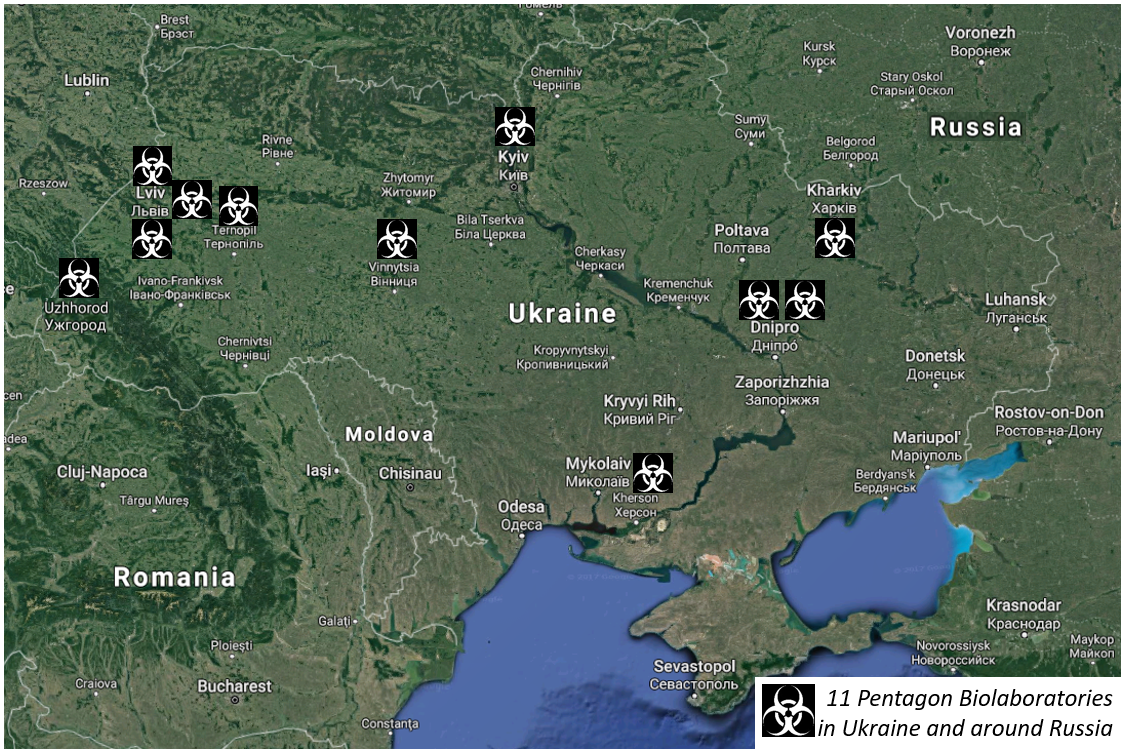 Last Tuesday, March 8, Under Secretary of State for Political Affairs Victoria Nuland testified before the US Senate Foreign Relations Committee on the Russian military operation in Ukraine. There she acknowledged the existence of biological laboratories whose contents Washington intended to conceal from Moscow stating, “…we are working with the Ukrainians on how they can prevent any of those research materials from falling into the hands of Russian forces, should they get close.”

Furthermore, she dismissed accusations that they had been developing biological weapons calling the allegation a “classic Russian technique to blame any other guy for what they plan to do themselves.” Senator Marco Rubio, present at the appearance, referred to “a lot of propaganda and misinformation” about the facility warning of its danger, to which Nuland replied that, if there is a biological attack, it will have been the Russians.

The great reporter Bob Parry wrote in 2014 about Nuland’s central role in the coup against Viktor Yanukovych in Ukraine, giving him a free pass in the form of dollars and logistics to the fascist pawns (“heroes of freedom”) of Pravy Sektor.

Such a statement leaves the door open to a staging like those instrumentalized in Syria, where even a documentary was made accusing the government of an alleged chemical weapons attack in Douma in 2018. Ten months later the BBC admitted that the audiovisual piece “contained serious inaccuracies.”

US biological laboratories funded by DTRA under a $2.1 billion military program (PDF), the Cooperative Biological Engagement Program (CBEP) are located in another former Soviet Union country like Georgia but also in the Middle East, Southeast Asia and Africa through bilateral agreements where the legal reach of multilateral bodies is short.

In the Ukrainian case there is the creation of the Science and Technology Center of Ukraine (STCU), an international organization funded mainly by the United States that has been granted diplomatic status and officially supports projects of scientists formerly involved in the Soviet biological weapons program.

Over the past 20 years, STCU has invested more than $285 million in funding and managing some 1,850 projects of scientists formerly involved in the development of weapons of mass destruction while U.S. personnel in Ukraine work under diplomatic cover and are compensated for deaths and injuries to the local population.

Georgia and Ukraine would not be liable or take legal action and would indemnify the United States and its personnel, contractors, and contractors’ personnel, for damage to property, or death or injury to any person in Georgia and Ukraine, arising out of activities under these Agreements. If DTRA-sponsored scientists cause death or injury to the local population, they cannot be held liable.ed in Syria, where even a documentary was made accusing the government of an alleged chemical weapons attack in Douma in 2018.

This type of agreement is reminiscent of those reached by countries of the global south with big pharma for the sale of anti-virus vaccines at the end of 2020. It is the same logic of the global bottleneck where the narrowest point remains for countries which, rather than “partners”, become testing grounds and platforms for extending a hegemonic agenda designed by and for the control of wealthy minorities.